Gameskinny has the skinny:

…X-Trading (the self proclaimed richest German corporation in the game) had been victim of a massive internal theft. After some research and walking the Eve news beat, it was confirmed that X-Trading had had 1.5 trillion ISK (the in game currency) stolen by a member of their corporation. To put that in perspective, that’s roughly equivalent to $75,000 US. This example of internet spaceships style white collar crime has set the record for the largest documented corporate theft in Eve history…. caused by a corp member being accidentally given permission to access and transfer corp assets.

Sometimes a cigar-shaped hull is just a hull.

Steer a spaceship with your brain.  No PLEX required:

A group of researchers led by Riccardo Poli, a computer science professor at the University of Essex, is working on that idea. For the first time, they used a brain-computer interface (BCI) to control a spacecraft simulator — although, by their own admission, in a highly simplified environment.

Sunrise went over the loadout one more time as she strode down toward the hangar in the bustling hub of Rens. The reputation of the Arbitrator was formidable, and she had some familiarity with the ship, but she had never … END_OF_DOCUMENT_TOKEN_TO_BE_REPLACED

“Build me a Phoenix.” The scratchy voice was one I hadn’t heard for a while.

I suppressed a groan and delayed looking up from my reports a moment longer. Couldn’t Suzariel just buy a ship for once? It’s not like she was ever short of ISK. She made more than enough of it separating pirates from theirs.

Finally, I glanced up. She’d aged a bit since the last time I saw her, which meant she hadn’t been pod-killed recently. Every time she got podded, she reverted to the perfect, unlined skin she’d had the day they first cloned her. But within a month, the worry-lines on her forehead and the creases around her eyes inevitably crept back.

“Do I look like I have a two billion ISK blueprint just lying around? I’ve got enough minerals for ten Dreads, but we’re in Rens, darling, and I’m not in the mood to drag this shit to whatever low sec hellhole you’ve got picked out for me to build it in.” I tried to keep the edge out of my voice, but really, this of-course-Ystvan-will-build-it bullshit got old.

“I have a blueprint already–” She held up a hand when I perked up at the mention of a blueprint. “Sorry, just a copy, but I’ll get you an original, if that’d help?” That was Suz, always trying to cut a deal.

“And the minerals? If you think I’m running the Hen Grenade in and out of low two times, even scouted…”

“I’m a good scout,” she said, her tone edging toward reproachful. “May I remind you that when your Viator got blown up, you’d just flounced off without letting me check the Huola gate first? I have never let you down, Yst, not when it counted.”

Ahh, but “when it counted” meant very, very different things to Suz and me.

“The Obelisk is worth ten times the Viator, and no, I’m not flying her into low. Not even with you and your whole posse scouting.”

She made an impatient gesture with her hand. “Forget the minerals, then. I’ll bring them in myself.” She got a look in her eyes that told me she had some trickery in mind for someone, but that wasn’t my problem.

“Where? And what do I get out of it?” I hated to be that way, but she needed to learn she couldn’t run all over people, and most certainly not me.

She mumbled something and looked down at her fingernails.

I cleared my throat and waited. I already had a theory where she was going with this. She rented an office there last month and even set up a headquarters.

“Amamake,” she said, raising an eyebrow. “And I’ll get you those planets you want. I saw you snooping around last week, and you know you don’t want to pay those customs rates. You build me a Dread, I blow up some customs offices, and you move in. Deal?”

Fucking Amamake. I’d be stuck there almost two weeks, too. I sighed.

“Answer me this, Suz. What the fuck do you want a Phoenix for? You planning to start blowing up structures for a living? Doesn’t sound like your kind of fun.” She liked quick, moderate ISK fights, and lots of them, not long, drawn-out battles.

Her expression immediately grew shuttered. “I just want one. I haven’t figured out what I’ll do with it yet.” Her nails again consumed all of her attention. 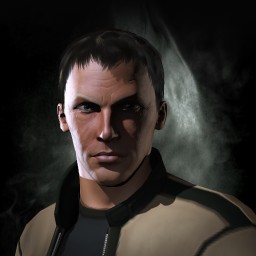 It had to be the Jovian. Anteres, if I recalled correctly. Everything she’d done for the last year came back to him. Who knew if he was even still alive? Jovians weren’t exactly the healthiest or most stable people around.

Damn it, Suz. I shook my head. Always chasing after what you can’t have. Not that I’m any better, I reminded myself.

She looked up, her expression so foolishly relieved I almost felt bad about making further demands.

“But when you go to meet the Jovian, you’re taking me with you.”

It is not always safe to undock.

Something to watch on the EVE-cave big screen!

The Syndicate Competitive League (SCL) is planned as a long running series of tournaments, organized and commented by veteran tournament experts, streamed live in high quality via twitch.tv.

Longtime players may forget that once they were new to the game, too.